This week marks the end of the regular season for baseball and the beginning of postseason.

Last year the SF Giants were barely squeezing through into the post season as the National League Wild Card…and eventually won the World Series! Since I live in the Bay Area, I of course wanted to go to a game but was unable to win the lottery for post season tickets. But! I did find out about this great alternative if you are ever in SF and want to go to a Giants game for FREE.

The secret is called “the knothole”.
http://sf.funcheap.com/sf-giants-opening-day-watch-free-knothole-att-park/

There is a secret “hole” in one of the walls of the stadium that is open to the outside world, where you can watch a game for at least 3 innings (more if the crowds are few) through a chain-linked fence that looks on to right field.

If i squint hard enough, i can see Buster Posey! 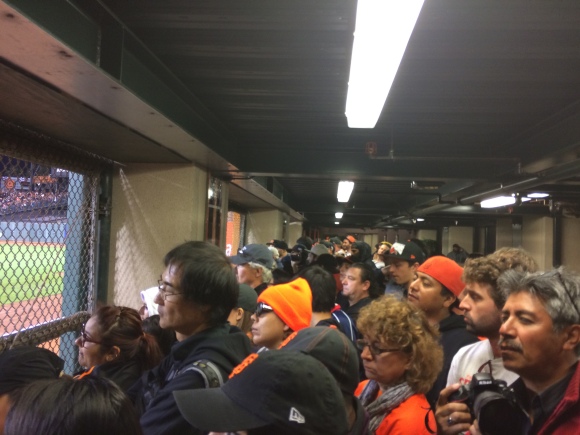 That, my friends, is how i was able to see Game 3 of the 2014 World Series at AT&T Park. The Giants lost, but it was still an awesome experience. My friend Becca had to wait in line starting around 4pm for a 7pm game….which got us in to the last 3 innings, so if you want to see a World Series game, line up sooner. But most other games you can arrive at any point to see some live MLB action. By far, this is one of the coolest things I’ve experienced at a Major League Stadium.

Even if you do have to wait in line for awhile, there are always things happening along the bay to entertain you (just bring lots of snacks or else you lose your place in line). Two kayakers named Dave & Steve (my previous wheelchair was named after him) are usually out on the water trying to catch home run balls. Or street artists who will spray paint “SF Giants” on your t-shirt which will double as a temporary tattoo for the next week or so. 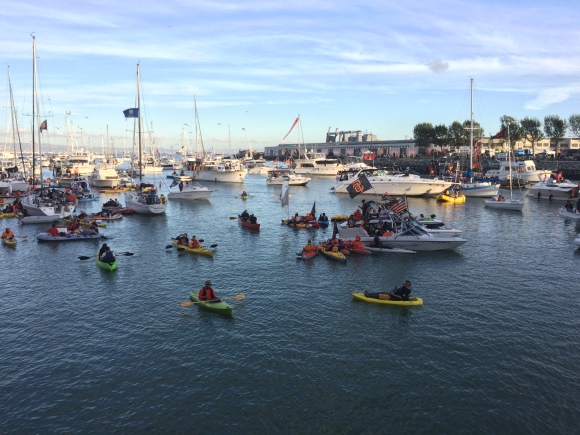 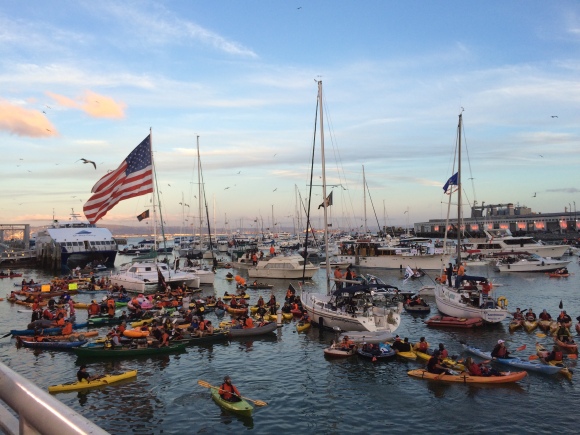 For my wheelie friends: everything is accessible to all types of wheelchairs and levels of disability. There is a metal bar close to eye-level if you are in a wheelchair, but it’s pretty easy to see the game above or below it. The stadium staff will also move people out of the way so you don’t have to fight the crowds by yourself.

Being small does have its advantages 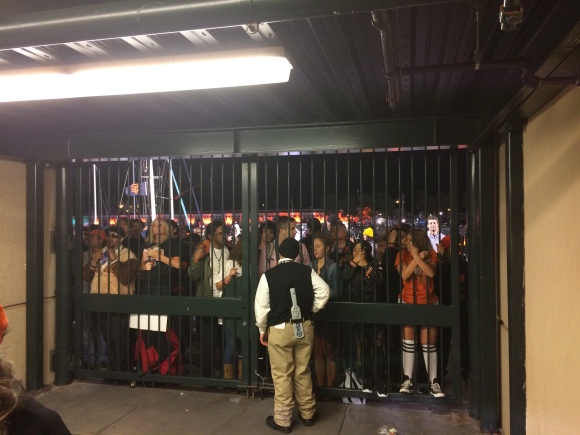 Open the gates and seize the day!