Got rental car from shuttle driver who says Asians are terrible drivers. His theory was that they don’t read signs like normal people do; left to right. They see in pictures. Which doesn’t equate to good driving. As he said this an asian stopped his van in the middle of a roundabout. He also said his sister lives in Oakland. But that she’s useless because she will plan and reserve his whole flight and stay but won’t tell him any times for pickup. Also she orders food for him and he doesn’t like that. She will never get married. She has a baby but no husband. So he is correct. She also is a pharmacist, does real estate, and owns a restaurant. He prefers the more laid back pace in NZ which is work 8 hours then go home and do whatever you want. I quite agree with him.

Becca has mastered driving on the left side of the road. She has only scraped our tire once and her incident rate of using the windshield wiper instead of the turn signal is trending downwards. There is hope for us all.

We ate brunch at a very hipster joint. It was amazing food. Becca got avocado toast with puffed chickpeas which turns out is hummus. And hot chocolate where you pour the chocolate into the milk yourself. I got asparagus with aoli, fried egg, something called “rocket” (I think lettuce) and bacon. My drink was rose vanilla kombucha. Both were amazing. They also served us sparkling water as the normal water in our cups. I can get used to that. Also at the brunch place our table was very close to two middle aged women who somehow figured out we were travelers. Maybe because of beccas giant backpack. One of them looked like Nicole Kidman. Still no clear evidence that it wasn’t her. But they told us about a beach and an island we should visit while we are here. Which was perfect because our time in aukland was very flexible and we had no set plans.

We first went to muriwai beach. It has black sand and is hard to pronounce. I decked my wheelchair out with the freewheel and my new adventure tires which have tread like mountain bikes. Becca dragged me through the sand until the area where it was more compact. I could wheel pretty well around. It felt like I was hovering over the sand like a ninja. The water was pretty warm and very green. We ended up finding the bird colony that Nicole Kidman suggested. There were lots of birds and the rocks were all white. So. Many. Birds. 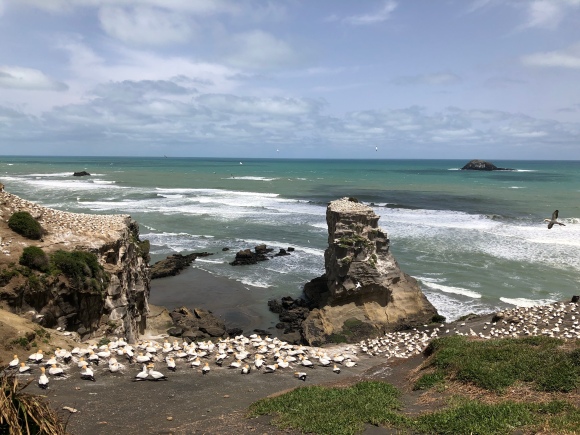 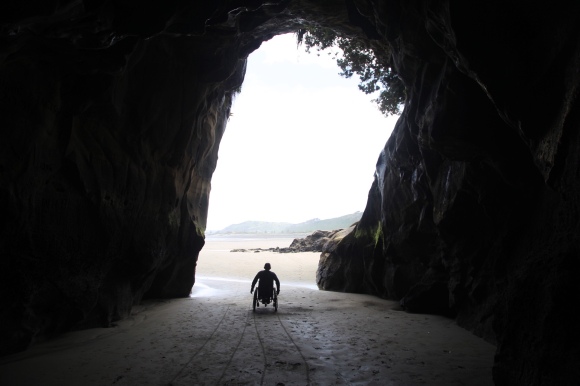 Then we headed to our Airbnb. But first we stopped at an ice cream place along the side of the road in farming country. They ask you what fruit flavor you want and then put real fruit into a mixing machine with vanilla ice cream. Note that this stand is right next to fields of strawberries. So it was very fresh.

When we got to our Airbnb we took a power nap. Which was great because when we woke up it was time for dinner.

We went to a pizza place and thought we were ordering margherita pizza but instead it had prochutto And a salad on top. Once we picked off everything the pizza was decent. Though we decided beccas pizza is better. The risotto though! Was. Amazing. It had mint and saffron and lemon zest with zucchini. The mix of flavors was incredible and not overpowering. Risotto was definitely better than the pizza.

Our Airbnb host got mad at us for parking in her spot. Hopefully she’ll still give us a 5 star review.